I was playing around with the 1930 census for Noralee and I created more questions.

In 1930 Noralee, age 4, lives with her mother (Theresa) and they live at the home of Theresa’s parents, along with Theresa’s sister (Lucille) and her husband (Russell Frost).

I made a screen print of the tree to show who lived there in 1930 as the last names are not the same.

I noted the address and looked for the family members in the city directory for 1930.

All are at the address in the 1930 Saginaw City Directory except for Theresa Salter. Maybe Theresa does not have a job or income. [City Directories usually just listed people with jobs, private income or homes.]

[Theresa may not have a job because this is April of 1930 and the Great Depression stock market crash occurred in Oct of 1929 — https://en.wikipedia.org/wiki/Wall_Street_Crash_of_1929]

So if Theresa and four (4) year old Noralee live in Saginaw, where is Edward Salter?

Edward was born in Canada, so did he go to Canada to find work?

We find that Lucille is working at Montgomery Wards (or Monkey Wards as my father-in-law used to call it). Her last name is still Doyle so she is not yet married to Russell.

Jas (James) Doyle must have income or owns his home because he is listed along with his wife Nora, in the 1929 Saginaw City Directory.

Note: the address “1513 Gratiot” on census and City directory match.

[a side note: on Google Map they have Gratiot Ave, court and road but the ave and court are the same, while the road is way off to the west of Saginaw.]

So we’ve learned a few things with this study but opened up some holes in the history of the Schrock Family Tree.

For My Blog Readers: I hope this gives you some new ideas for sorting through your family tree history.

Here is the 1940 death cert for baby Salter that is mentioned in question 3. 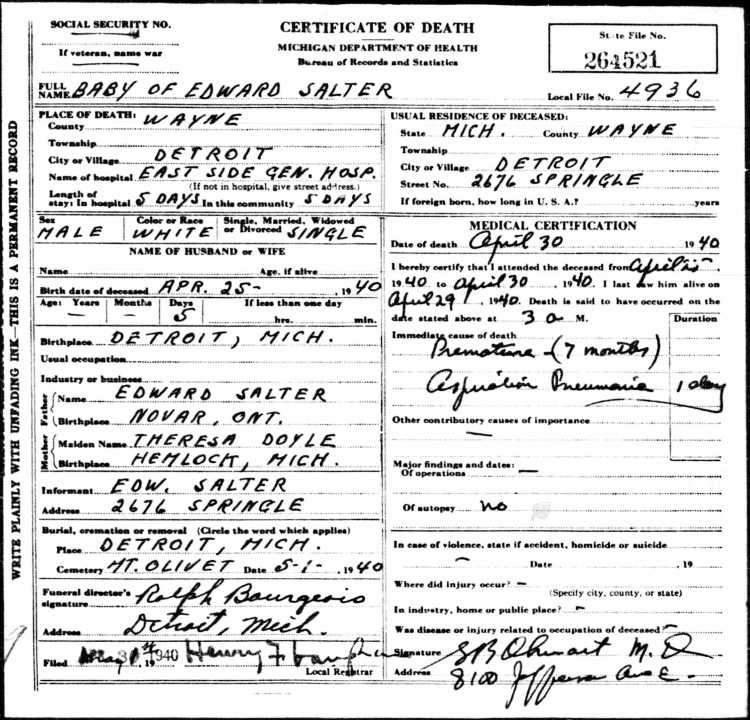