My good friend Annette Thomas wrote this wonderful piece about her mother and I asked her if I could put it on my blog.

Edith Hiebel was born into a family of good, honest, hardworking people on March 9, 1927 in Liberec, a town in the beautiful mountains of Czechoslovakia. She, like many others of her generation, endured times of severe hardship, having been forced from her home at gunpoint by Russian soldiers at the age of 16 and made to flee to Germany. Her only brother, Herbert, was killed in Russia and she and her parents never fully recovered from that loss. I can still remember our visits to the cemetery in Waldstetten, where they had the memorial for their soldiers lost in war. She would sit there quietly and reminisce. Time spent in refugee camps allowed her to see man’s inhumanity to man and she developed a strong sense of compassion for the suffering and abused, man and animal alike. I remember when she would bring home individuals from 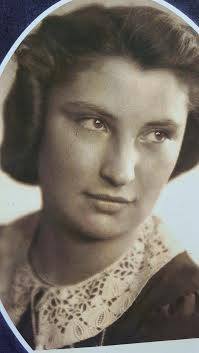 a nursing home and sit next to them on the couch, holding their hand, or let them go through her closet and choose a nice outfit for themselves. I remember too, when she would open the basement door, call out the name of the guinea pig (Herbie) that was dying of cancer and I would hear his squeals as he responded to her voice. She would bathe him and clean his open wounds. Her compassion for the suffering was palpable. She studied medicine when we were in school and I remember her joking that the lab needed a cat to dissect (referring to our pet). She laughed a lot, tears often streaming down her face. She had a great intellect and a quick wit- she was hilariously funny. I never fully appreciated all that she was because I did not know her history. Unfortunately, sometimes we learn that when it is too late. I do know that I loved her, very much, and in subtle ways, she showed me that she loved me too. She treasured her husband, children, grandchildren and her life. She read a lot, was a brilliant story teller, enjoyed quiet walks, classical music (that is how my parents met) swimming and moments of quiet reflection. Sometimes she liked stirring the pot just to get a rise out of people. What I will mostly remember is her quiet strength, fierce devotion to family, kindness towards others, courage, levelheadedness (she was always the voice of reason) and her honesty. She was truly a woman of honor. 20 years ago today, she died on the operating table at All Children’s Hospital in St. Petersburg, Florida, the same hospital where she got her first job when we moved to this country. Some of us were in Oregon, where we were supposed to meet her that week for family time. Instead, we received her ashes and buried them on the hillside behind her home, where my beloved father is buried now too. The sunset the night she died was spectacular – she would have loved it. The next day the skies seemed to open, and it rained. My brother said that even the Heavens were crying for her. When I spoke to my father that day, he shared with me that when the medical team was frantically massaging her heart to keep her alive, a baby girl was going through the same thing in the adjacent room. They died at the exact same moment. How fitting. My mother carried this baby to Heaven in her loving arms. Ich vermisse Dich so, meine liebe Mutter. Ich werde Dich nie vergessen.

I hope this story will peek your interest in looking up stories about your family and/or you will write such a story, so others can get a glimpse of your family background.