My first ever real date was when I was in 8th grade back in 1961. I asked Linda Schrock to go to the movies with me… not some regular film at the Redford Theater but a big screen showing at the Fox Theater in downtown Detroit. The movie was “West Side Story”.

My father drove us down to the show and after the show Linda and I rode the bus back to Six Mile and Beech Daly, the end of the line for the Six Mile (McNichols) bus route.  The bus stop was right in front of Our Lady of Loretto church, so I walked her home from there.  She lived on Centralia which was just a few blocks from the church. After I dropped her off at her house, I walked home to Garfield St.  To get to my house I had to cross Claude Allison Field then go through the Keller woods in back of the Presbyterian Village and then one block to my door.

Linda and I never went out again; we had graduated from Our Lady of Loretto in June

and in September we would be going to different schools; she to Our Lady of Mercy HS in Farmington and I to Visitation HS in Detroit. I would graduate from Redford Union HS in 1965.

We saw each other from time to time, at church but never again on a date. I did see her again around 1972/73 and was able to talk to her, when Our Lady of Loretto had an all school reunion.  Time once again got in the way and it was not until 2013 that Linda and I once again connected.

I was working on my high school 50th reunion and in so doing contacted some of the people I had graduated with back in 1961 from OLL grade school. Joanne Megis suggested we have a grade school reunion at the same time as this HS reunion, so we started gathering names. One of the names that came up was Linda Schrock and come to find out that she had been living near me for the last ten years.

After the Army in 1971 and after college in 1974, I settled down in the Lansing Area, so I lost all contact with the old Redford Township classmates. Around 1996 I was transferred to Pontiac and bought a house in Clarkston, Michigan. Linda had a house about five miles from where I lived, and we never knew it.

Joanne and Linda graduated from Mercy in 1965 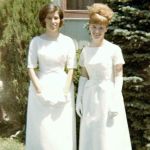 Well, Joanne arranged to get a reunion committee group together and we met at Linda’s house to plan the dinner.

We had a great time catching up on each other’s lives, each had their own interesting story to tell and we planned and talked and talked some more.

The dinner was a huge success and we vowed to do it again.

Linda and I kept in touch over the next years and we had lunch a couple of times, once at a Thi Restaurant she liked and once we had lunch with my son Juan. My son Juan and her son Joe were about the same age so we had some things in common.

Since I work on family trees I helped her with her tree and in so doing got to learn about her family. At one of my genealogy club meetings I talked about Linda’s family tree and one of the ladies (Cheryl) asked me if this Linda had been a teacher. Cheryl tells me that her 7th grade cooking teacher was a Linda Schrock and she was cheerleader for the Lions. Cheryl sent me this photo.

In my conversations with Linda, I would ask about her mother because her mother lived in the Presbyterian Village, the same one that was across from my home on Garfield.

We planned another reunion dinner and once again Linda had the committee meetings at her house. Peter, her best friend helped a lot with those meetings and one could tell that they were a perfect couple, she gave the orders and he complied.

Linda’s uncle (father’s brother) died and I went to the funeral home and met some of her family.

On one of our phone conversations she told me that she had just been diagnosed with cancer and that they were getting right on it. Her stories of the hospital visits were made for TV sitcoms and Peter was there guiding her through the process.

We had another reunion dinner but Linda could not be there because of her cancer treatments.

When her mother died I went to the funeral home and gave her a scarf to wear to her treatments and we both laughed said “We have to stop meeting like this.”

I will be meeting Linda once again, Tuesday June 6th and will say good bye to her on June 7th at Our Lady of Loretto Church across from the bus stop, where we once stepped off the bus at the end our first and only date. 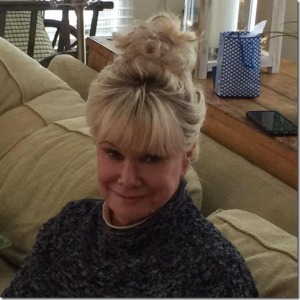 Daughter of the late Nora Lee and Leroy Schrock.

Also leaves many nieces and nephews.

Service at Our Lady of Loretto Church in Redford (NE corner of 6 mile & Beech daly) Wednesday June 7 instate 10am mass at 10:30am 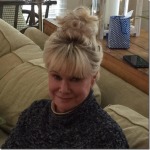 One of Linda’s friends posted a photo memory of Linda which has many photos I had never seen. — https://www.youtube.com/watch?v=yvWop6WTImA