What does this have to do with genealogy?

Just because your relatives come from Pennsylvania doesn’t mean they won’t be featured in a Canadian newspaper. 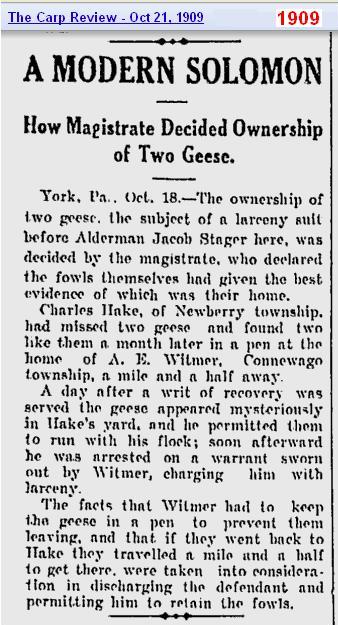 You are probably thinking “What does this have to do with genealogy?”

In part you are right it has nothing to do with Genealogy, Family Trees, Obits, or Marriages but it is an important lesson to finding your family members.

Again you say, “But it has no important dates or relationships that I can use on my Family Tree!”

And there is the mistakes most of us make. We don’t see beyond the printed line, we don’t see anything we can put on the tree; an actual event.

However, this little story about the two geese gives us many clues about our relatives if we come from the “Stager, Hake, or Witmer” families.

Still you say, “It has no relevant information!”

Well, have you considered that if the actors in the story were part of our family we would now have a location for them? We now know where they lived in a certain period of time. We now know that Jacob Stager was an Alderman in York, Pennsylvania and the Charles Hake of Newberry township and A. E. Witmer of Connewago township kept geese and were probably farmers.

We now know that they were alive in October of 1909.

If we have a Charles Hake from Pennsylvania on our tree we can confirm some facts about him. We know the Charles in the story was an adult born before 1889 (20 years old+) so if our Charles fits that age group we have a clue to work with. If he was born after that date then we can discount the story.

We also now know that Alderman Jacob Stager was a very wise magistrate.

There are many little clues that one can glean out of a newspaper story, we just have to keep our eyes and mind open and think beyond the printed lines.

Thank You.
Jose from Clarkston, Michigan