Can a City Directory entry confirm a death date?

Let’s take a look at one case where the death date was attributed to the father instead of the son and there was no way of confirming the information.

Paul J. and Catherine Hungerford had a son in 1846 who they named Paul J. Hungerford.

Now Paul the father was born in 1809 and he appears on several trees. All the trees had his death date as Dec 1875 and they had an “Official” record to prove it.

The problem was that it only gave this information:

There was no way of knowing if this was the father or the son.

This too did not give a confirmation because the age for this Paul could be 60 or 30. 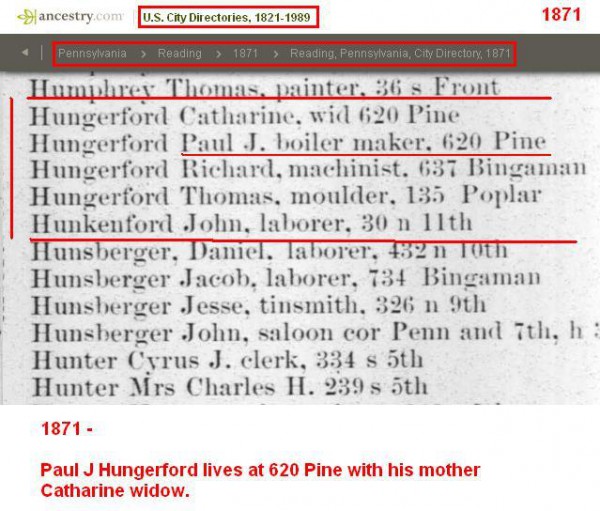 In that same directory I also found a Catherine Hungerford, living at the same address and she was a widow. On all the Family trees, Paul the father’s wife is named Catherine and there are records to prove it, so this Paul who is living with her at 620 Pine St has to be the son. It also proved that Paul the father could not have died in 1875 because Catherine is listed as being a widow in 1871.

I contacted the other tree owners and told them that the obituary for Paul can now be confirmed to be for the son and not the father, based on the address given in the City Directory and in obituary and the fact that Catherine is a widow by 1871.

The obituary that I found was not highlighted to be picked up in a search so it would not have been found by people searching for it. Only by doing a physical page by page search in the Google News Archive old Reading, Pennsylvania newspapers was I able to find it and I only found it because I had a date for the death and a location of the death.

This is the transcript of the official death record:

This death record also confirms the obituary because it has the same cemetery name as given in the obituary.

So if you have a situation where you need to confirm a date, consider looking at the City Directories for possible clues.

← Tangled up in the branches
Ida Viola Hugerford – victim →