The Problem with Emma L Wickersham

I ended my last blog with the following statements:

Normally I don’t trust the information that is on a family tree, I just use it as reference to verify some other information but this time everything looked okay.”

“Normally putting in the full name instead of an initial is good practice and normally it does not cause problems but this time it caused a huge problem and I will explain it all to you in my next blog.”

Well this is my next blog and here is the explanation.

As I was telling you, I found the Emma L Wickersham obituary, created a fake tree for her and thus found lots of family trees who had Emma and her family on their branches. I also told you that they all started sharing information; taking items from some other tree and putting them on their own tree. And I also told you that most of the family trees I found had Emma L listed as Emma Lucille, so on my fake tree for her I also listed her as Emma Lucille.

The problem is, as I see it now, there is no documentation that verifies her middle name being Lucille. With no verification of what ”L” stands for, then where did that name come from?

The only conclusion I can come up with is that people got Lucille off of the 1920 and 1930 census, because you see Joseph A Wickersham, Emma’s husband, is listed on those two census records as being married to a Lucille. This Lucille is about the same age as Emma would be, she is born in Delaware as was Emma and her parents are born in same place as Emma’s parents so without any other data Emma and Lucille could be the same person.

Fair enough, I’ve seen many family records where a person goes by one name on one census and by another name in a subsequent census. And yes, it is a common practice to do so, and yes Ancestry.com has no problem determining that the person listed as Joseph is the same person listed as Jo or Jos. There is no problem when a person is Emma L on a 1910 census record and Lucille on the 1920 and 1930 census. The problem is that SHE DIED IN 1912, so she CANNOT be on the 1920 and 1930 census.

I don’t know if the census records are where the family owner got the name Lucille. I don’t know which tree owner first put Lucille on their tree; all I know is that it caused a big problem.

You see, Joseph A is married to Emma L in the 1910 census and she died in 1912 and then in 1914 Joseph A married a Lucille so she is the one who showed up on the 1920 and the 1930 census. The problem is that almost all of the family trees listed her as his only wife and because they thought Emma L was Lucille they did not bother to look for another woman.

To be fair, I only saw the error when I was looking at all the activity going on by all the family tree owners and I thought “Emma’s obituary would be a good example for my Blog of what an obituary should look like, and how it helps people fill in their family trees.” It has lots of relevant data, it gives her age, her father and husband names, it has a home address and it even lists the names and residence of her brothers. I thought I would check her profile page to make sure I had the names and dates correct. When I went into her profile page I noticed that Ancestry.com was presenting me with hints for Emma; they were giving me 1920 and 1930 census records to consider. I knew this couldn’t be Emma because she died in 1912 so I figured I’d better look at the other trees to see if any of them had picked these wrong hints. And sure enough, I found that some of the owners had used those census records as part of Emma’s life. Those trees had no mention of another person named Lucille they listed Emma and Lucille as the same person. I also noticed that the family trees listed Emma’s maiden name was Cullen on some trees and League on others. 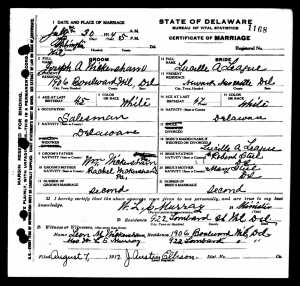 All one has to do is enter the last name of a person and the last name of a spouse and if there is that combination in their data base FamilySearch.org will get it. I put in Wickersham for the last name and for spouse last name I put in League (since that was the name I was seeing on some trees). Right away I got a match and there is where I found out that in 1914 Joseph A. married a woman named Lucille League. I did the same for Wickersham and Cullen and found the 1892 marriage certificate for Joseph A and Emma L.

I captured the information off of FamilySearch.org and sent out a message to all the family tree owners and explained what I had found; two marriages two different people.

What tends to happen when there are many family trees available for a person is that one owner will cite another family tree as their source of information. Along comes a new member of the same family and sites that tree for their information and thus bad data gets folded into the fabric of the family history. Anyway the family trees for Joseph A. have some very impressive family photos and lots of family information but they did not have the second marriage and if they did they had her name wrong. People start labeling their pictures and scrap books with wrong data. A picture of Joseph A and a woman in 1925 gets labeled as Joseph and Emma and after awhile no one really knows what is real and what is made up. In the immortal words of Dr. Peter Venkman: ”Human sacrifice, dogs and cats living together… mass hysteria!”

I know some of you are thinking that it is no big deal that a second wife was not listed for Joseph A Wickersham, but it is a big deal to the family tree of Lucille Steel Teague. Oh! You noticed “Teague not League”! 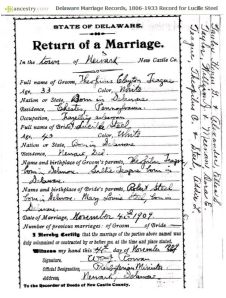 You see her family branch also has some problems which compound the confusion of names and dates on a family tree. On her certificate of marriage to Joseph A. she signed her last name League because that is her name. She was born Steel (Steele) but in 1909 she married a Theo Teague. Well the handwriting on the different census and marriage certificates do not clearly show the difference between an “L” or a “T”, so if we look for a Lucille League we will find only the Joseph A marriage but we do find several records of Lucille Teague.

I know some of you are saying what difference does it make to have a small error for a person who died one hundred years ago and I suppose it doesn’t matter unless of course you are the person who got left out.
I have a folder labeled “NO LUCK” and in it I have dozens of newspaper items for which I have not been able to find a family tree which contains the person mentioned in the newspaper item. The items that I have contain a lot of good information and there should be no problem finding someone who remembers these people by putting them on their tree. I guess somewhere along the line someone neglected to put the person on the tree; ”No big deal, I am not even following that line.”; and in time that person ceased to exist.

My whole point of writing this story is to stress that when you build your family tree do not include items on it that you cannot verify with official documents. Maybe five other trees have the same information on their trees but do you really know where they got that information? Do you really want to have a tree that no one trusts? You are devoting many hours to creating a family tree make sure that it has a good root system.

To View the Original item,
Select The Sunday Morning Star in box below:

5 thoughts on “The Problem with Emma L Wickersham”