Here is another example of newspaper items that can be helpful to finding information for your family tree. If you have a minister or reverend somewhere on your tree that person will be named in many newspaper articles; especially in the old newspapers. The editors of the newspapers wanted to sell their newspaper, despite what they might tell you. They wanted to sell more newspapers than the other editor of the rival newspaper, so there was a competition to put stuff in their newspaper that the other guy didn’t have. What better way of getting readers then to tell them about everything that was going on in the town, not just the BIG news items. 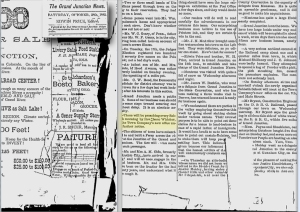 I received a message from Ancestry.com saying that a user had put a newspaper item on a family tree, so I went to see it. It was a tiny item saying that “Rev. Isaac Whicher would be preaching at the Town’s Company’s new office.” Not much news there but it was picked up in a search by the tree owner. I read the item and was about to go off of the family tree when it occurred to me that the name of the newspaper seemed familiar. I went back to my files and sure enough ”The Grand Junction News” was a newspaper that I had used to post an item about “Rev. Isaac Whicher ”, but the item I was looking at from the tree owner was not the same item I had posted. I brought up my link to my item and; since I get the full newspaper I was able to scroll around the newspaper page to see what other things were on it. When one picks up a newspaper off of search engine, it is usually only the one page with the relavent word you were looking for. You do not have the luxuary of viewing the rest of the newspaper. Getting back to my reviewing the page, I saw down to the left on the newspaper page from where my item was, the item the owner captured.
My item has two mentions of “Rev. Isaac Whicher ” while the other one was just one mention about him.

I did a screen print of my item and created a fake tree so that I could put the photocopy on it. You see in Ancestry.com message site where you can connect to other users you can only send text data. In order for others to be able to see my newspaper item screen print I have to put it on some tree.
I contacted the user that Ancestry.com had mentioned (family tree owner Joan) and told her that I had more information about “Rev. Isaac Whicher ” and that I had put it on a fake tree. I also commented on the fact that her item was on the same newspaper; same page, as my items and I didn’t know why her search did not pick those other items when it picked up the one  item. She wrote back and said ”…I imagine that Ancestry uses optical character readers for the old newspapers, and sometimes they miss things…”, which makes sense.

So you see you get what you search for but sometimes there is more out there then what the search engine picks up. If you get a search result and it is a newspaper item then try to find a full copy of that newspaper to see if there is other news items about your relative that were not picked up.

The above plug for my blog was written by me and I approve this message.

To View the Original item, [the item is to the right of this link Page 3, Column 2]
Select Grand Junction News in box below: