Update: 21 Aug 2013
The Google News Archive list is very useful but needed to be enhanced by adding the name of country or state where the newspaper was published.

I completed that task of adding the name of where the newspaper was published. The Name of my chart is: Enhanced News Archive List with Locations 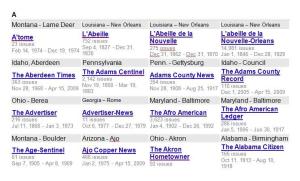 USA Only E.N.A Chart no tool

Since the Google News Archive and my Enhanced list were arranged in alphabetical order by name of newspaper I thought it would be useful to arrange the newspapers by state so I created a new chart which has only the newspapers published in The United States and arranged by State. Table of States 2

I also added a navigation tool at the top of the chart, so that people would not have to scroll through the long chart. The names of the fifty (50) States plus DC are on top of the chart so you can pick the name of the State you want to see and you will be taken to the collection of newspapers from that State.

USA Only E.N.A. Chart with instructions

I included the number of newspapers available for each state and a “Back to Top” button on each of the individual States collections, so you can quickly go back to the top.

Here is another screen shot of the USA Only E. N. A. Chart, showing two states on the chart. 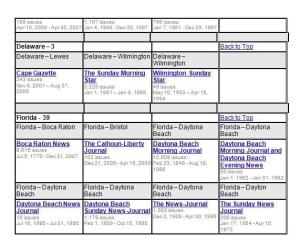 I hope you will find this chart useful for your searches of news stories about your family tree ancestors.

NOTE: you must open or save the Enhanced files using: Microsoft Office Word 97 – 2003

← Enhanced Newspaper Archive List
Clip It ! – How to do a screen print →